Fiji schools to use match as learning experience

The Fijian schoolboys and schoolgirls rugby league teams’ inaugural clash against their Australian counterparts in the Vuvale Challenge Shield at Albert Park in Suva today will be used as a learning experience.

Both team captains have expressed a keen desire to showcase their talent as they take on Australia, and gain as much as they can from the experience.

Fiji schoolboys captain Tomasi Seru said his side had been preparing well for the past few weeks and had been especially focusing on their skills – passing, tackling and defence.

“We are playing against one of the top countries in the world and we know Australia is coming with experience and fire,” he said.

“Considering league is one of their main sports, we would like to learn more as we play.

“Expectations from our side are grasping as much we can so that we can take back to our own individual schools and put it to practice what we’ve learnt.”

Schoolgirls captain Ruth Raketekete said coming from different schools, players brought in a lot of their own experience and the girls had been working to put all their skills together to take on the Australian side. 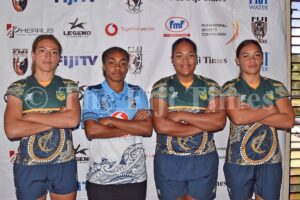 “We’ve been having very long team bonding and just getting to know each other,” she said.

“We have different skills and knowledge and just putting it down into cohesive tactics and working on how we can defend our opponents.

“It’s going to be a tough game, but we are ready to take on the Australian side and also learn from them.”

They both added that coming back from a two-year break due to the COVID-19 pandemic, it was about time more international tournaments should be held to strengthen and give more game time for these youngsters who will be the future Fiji Bati and Bulikula players.

The girls kick off proceedings at 1pm followed by the boys at 3pm.