Jarryd Hayne has been jailed for five years and nine months on Thursday. SAM MOOY/GETTY IMAGES

Disgraced former NRL star Jarryd Hayne has been jailed for five years and nine months for sexually assaulting a woman in her Newcastle home while his taxi waited outside.

Hayne, 33, was convicted in March of two counts of sexual intercourse without consent after he assaulted the woman, then aged 26, with his hands and mouth and left her bleeding from the genitals in September 2018.

He had been chatting to the woman on social media for almost two weeks, but they had never met – until the evening of September 30, when he stopped at her house on his way back to Sydney from a two-day buck’s party in Newcastle for another footballer.

Hayne played the woman several songs on a laptop, including the Ed Sheeran cover of Wonderwall, before the taxi driver beeped the horn and the woman discovered the car was outside.

Hayne went outside to placate the driver, then went back inside where he watched several minutes of NRL grand final coverage with the woman’s mother in the lounge room. He then went to the woman’s bedroom where he began to touch and kiss her.

The woman was not interested in sexual contact with Hayne after discovering the taxi, and said to him, “what do you think you’re doing, there’s no way I’m going to touch you”. Hayne persisted, removing the woman’s jeans and assaulting her despite her protests of “no”.

On Thursday, NSW District Court Judge Helen Syme said Hayne was “fully aware that the victim was not consenting and went ahead anyway”, when the woman had “every right to feel safe from attack in the privacy of her own. 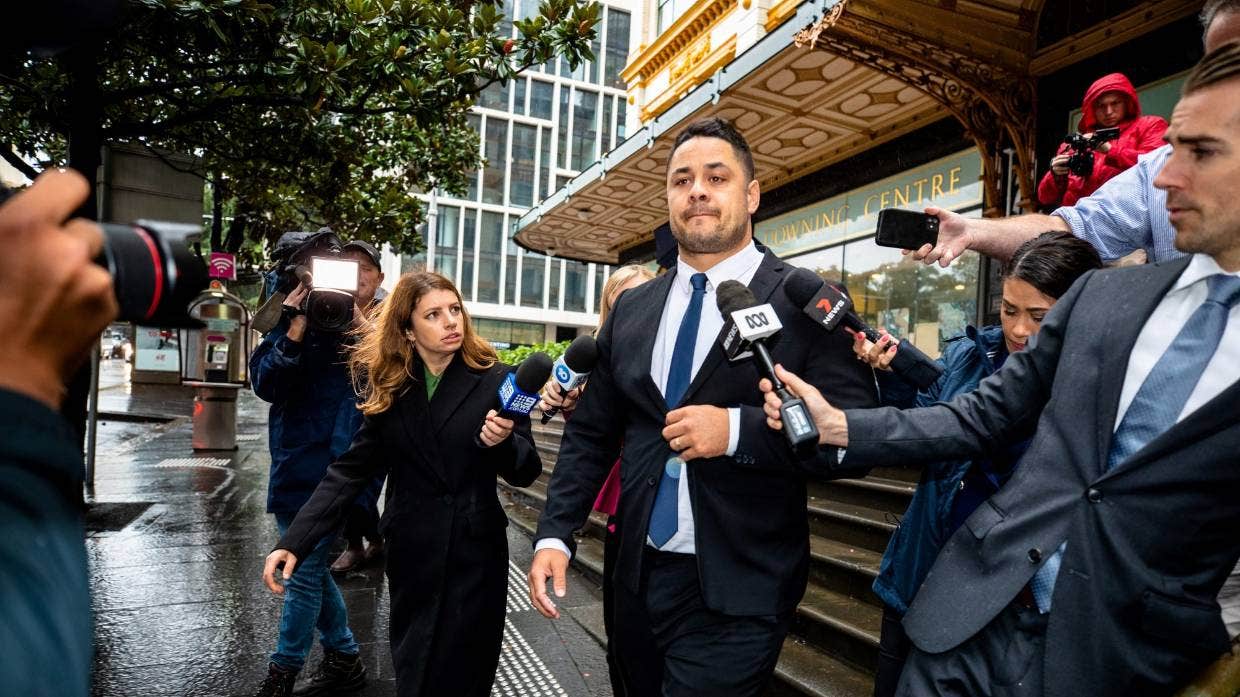 Jarryd Hayne walking out of Downing Centre Courts after a guilty verdict back in March. EDWINA PICKLES/SYDNEY MORNING HERALD

Judge Syme said Hayne, who weighed about twice what the victim did, only stopped the attack when the woman began to bleed, and not “because he realised what he was doing was wrong”.

She said the woman “clearly and firmly” told Hayne she was not going to touch him, but he was “intent” on sexual activity and “simply chose at that time to ignore her”.

“Perhaps he had not even considered, prior to her saying that, that he could be refused. There was no planning, but his attitude did not countenance rejection,” Judge Syme said.

She jailed Hayne for five years and nine months, with a non-parole period of three years and eight months.

A woman began to sob in court when the sentence was announced. As four corrective services officers approached Hayne to take him into custody, one of his supporters shouted at him: “you’re innocent”.

Judge Syme said Hayne “does not accept that he did anything wrong, and for reasons best known to himself cannot accept the decision of the jury”, so he may find a jail “deniers” program helpful.

In a victim impact statement on Thursday, the woman said she was destroyed and damaged by what Hayne did, but “I’m still standing”.

“I felt dirty and violated. He made me feel like an object and was looking straight through me,” the woman said.

“My vagina was stinging in a throb-like sensation and I couldn’t understand or fully comprehend that he had just done that to me. I sat on my bed hugging my knees and staring into nothingness.”

The woman said she “wanted to scream” when she made the mistake of reading what people were saying about her on social media, and she felt the urge to set the record straight as people publicly speculated about what happened.

“People talk about my vagina, my choices, and like to give their opinions based on what they’ve heard, and it is the most helpless feeling,” she said. “No matter what happened before or after the assault, no matter who he was or what he’s done, no means no.”

On Thursday, Hayne’s barrister said his client has suffered punishment outside the court, including having his family followed and photographed, and losing a “lucrative” one-year deal he was on the verge of signing with NRL club St George Illawarra, worth A$500,000.

Hayne maintained on Thursday he “didn’t do it” and claimed “what the law says, you’re innocent until you’re proven guilty, I was never afforded that”.

He will be eligible for parole in January 2025.