A customer comes out from Parmar’s Footwear Fashions after shopping. Picture: ELIKI NUKUTABU

Parmar’s Footwear Fashions Ltd has been around since the first visit of Queen Elizabeth II in 1953.

However, the Parmar family was engaged in the shoe repair business well before that.

Parmar’s Footwear Fashions managing director Ishwarlal Parmar said his father, Govind Bhai Parmar, established a shoe repair shop in Ba in 1934 – in partnership with his brothers after returning from India.

“Later on, they decided to split up and go on separate paths so my father decided to move to Lautoka,” the 82-year-old said.

“In Suva, my father started a small shoe repair business and because it was the middle of World War II, a lot of war ships would call into Suva wharf anchored so my father would pedal his bicycle to the ships and earn a living by repairing their shoes or transporting goods.”

Mr Parmar said his father operated a shop in partnership with a friend.

“After my father’s brothers returned from India, he parted ways with his friend and joined his siblings.”

He said the Parmar brothers established their business in the building which is currently occupied by Rups Big Bear.

“That building was still under construction at that time and they were its first tenants.

“They started 100 per cent with shoes because that was their profession – shoe repairing.

“The Parmar brothers partnership continued until 1953 when my father left his brothers and ventured out on his own.

“They were in the same profession but conducted separate businesses still in Mark St.”

He said his father funded his own shop through his savings and his shareholding from the brothers.

“And at that time it was purely shoe repairs so the funding was only required to buy materials such as leather, sewing thread and other materials.

He said immediately after joining his father’s business, he travelled abroad to source and purchase merchandise.

“All of these branches were managed by my brothers, my role was looking after the imports and the stock.”

The business was doing well until 1987.

“As a result of the military coup, my brothers decided to leave the country and we were forced to close the other branches.

“At present, the Lautoka shop is continuing operations but is operating independently of us.”

He said one of their biggest challenges was obtaining supplies from abroad. 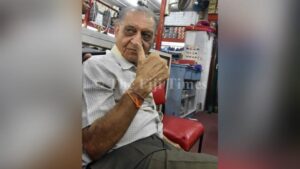 “It is important to travel to other countries and make contact with the suppliers.

“Initially, I started buying shoes from wholesalers in Australia and New Zealand and as the years went by and with the experience gained, I began to travel to China, Taiwan and other countries to get my supplies.

He said the knowledge and techniques learnt over the years enabled them to survive the COVID-19 pandemic.

“We also faced other major challenges in the past such as during the first coup, we had losses because the shops were broken into and robbed and at that time we had difficulty in getting our claims from the insurance companies as it was their first experience.”

Mr Parmar said he learnt a lot about keeping up with international trends during his travels and renovated his shop to reflect this.

“Once I started travelling, I learnt a lot of things and brought that style here.

“Before, the shoes were kept in glass cases which was a hassle for us because we had to open it every time the customers wanted to see something.

“After visiting Singapore, I got shoe racks and customers enjoyed it because they could just come and try the shoes by themselves.”

Ishwarlal Parmar is highly regarded and respected as one of Suva’s oldest businessmen.

He said his only advice to young up and comers was “don’t take shortcuts, there is no shortcut to achieve success”.

“There is no shortcut to hard work.

“If you are determined, you can do it.

“There was a time when we were struggling.

“We have seen poverty, there were times when we had no money for food and that was one of the reasons I was forced to leave school but we managed to sail through purely because of hard work.

“My father was a great inspiration and I always try to follow in his footsteps.”